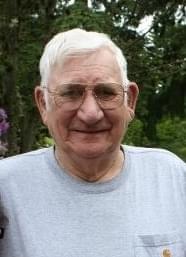 Gerald (Jerry) Christianson passed away at a Mesa, Arizona nursing home February 21st.  He was 78.

Jerry was born on March 22, 1937 in Bottineau, North Dakota, and raised on the family farm in Sherwood, North Dakota, along with 8 other siblings. Jerry attended school in Sherwood, and played on the school basketball team. After he graduated, Jerry went into the Army, and served in Germany as a mechanic. After his stent in the Army, Jerry returned to North Dakota, and worked in the oil fields, and eventually met his future wife, Geraldine Wagner, of Velva, North Dakota. After they got married, they would be known as Big & Little Jerry, as Dad was tall, and Mom was short. They had their first child, Lisa, in North Dakota, before moving out west & settling in Kirkland, Washington. Shortly thereafter, son Brian was born. Big Jerry worked for the City of Kirkland, before starting his career as a framing carpenter. The Jerry’s then operated their own construction company for several years, building houses & apartments all over the state of Washington. In the mid- 70’s, they bought some property in Woodinville, Washington, and cleared the land, and built their dream house, yard, and horse pasture on 3 acres.

In the latter 70’s, the Jerry’s welcomed Lisa’s friend Nina to come live with us, and she soon became part of the family. Jerry then worked as a construction superintendent for several general contractors in the Seattle area, until he semi-retired in 2004, after losing little Gerry to Biliary Cancer. Dad sold the property to Daughter Lisa & Son in Law Bob after Mom passed, and briefly lived in the basement, before going back to work in Moses Lake, Washington, helping the owners of a resort develop their property. Mom’s dog Sassy would be his companion for the next few years while he kept himself busy.

About 5 years later, Jerry re-united his friendship with old school friend Sharon Osterberg, and they became a team from then on. Dad endured some health issues, and Sharon being a retired nurse, was able to help him during these times, and was a wonderful advocate, and side-kick. She brought him joy, happiness, companionship, love & opened him up to new adventures & new people. They often traveled, taking trips to see family in North Dakota & Minnesota, and would spend their winters’ in sunny Mesa, Arizona, where they had a large group of friends and neighbors who cared forthem both. Dad even bought a 4 wheel ATV, and rode with some of his friends out in the desert, before getting hurt, and having to quit riding. In the springtime, they would head back to Springfield, Oregon, where Sharon had a house. They dreamed of taking a trip to Norway one day, but Dad’s health issues put that on hold.

Last October, while staying in Springfield, Sharon & Dad were involved in a serious car accident in which they were both injured. Jerry was having a difficult time healing after the accident, and after several trips to the doctor, a very aggressive cancer was found in multiple parts of his body. His initial prognosis was grim, with the docs’ estimating 4-8 weeks. Family was summoned, and gathered around him, but, unfortunately, he succumbed in only 2 weeks, with his loving family by his side.

Big Jerry enjoyed spoiling his grandkids, tending to his garden, fishing, bowling, sports of all kinds, and spending time camping & boating with the family at the Potholes near Moses Lake and at Lake Chelan, Washington.

Jerry touched many lives during his time on earth as a loving, caring & good provider for his family, easily making friends, welcoming neighbors, and was well liked & respected by his co­ workers & sub-contractors. Dad had a good reputation of bringing his jobs in on time and often under budget. He will be missed by those he cared for, and those who cared for him.

Dad, hope the fish are biting, and the gardens’ growing in God’s Kingdom. Rest In Peace Big Jerry

A Memorial/Celebration of Jerry’s life will be held at the Redmond Ridge Community Center, located at 10315 Cedar Park Crescent NE, in Redmond, Washington on April 2, 2016 at 1PM.

Donations can be made in Jerry’s name to the American Cancer Society, or the Cancer Center Banner Health Foundation in Mesa – (602) 747-4483.

Offer Condolence for the family of Christianson, Gerald Charles