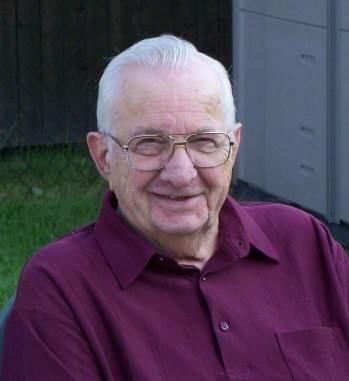 Darrell Duane Grovesteen was called to heaven on November 4, 2015, at the age of 91 in Mesa, Arizona, a mere seven weeks after being diagnosed with cancer.
Darrell was born September 11, 1924, to Guy Alzo and Edna Mae (Vandervort) Grovesteen. He graduated from Beloit Memorial High School and worked his way up the career ladder to become a lifetime Data Processing/IT Manager. Darrell was baptized, confirmed, served his church in many ways over the years, and remained steadfast in his faith until his last breath. He was a Boy Scout leader for many years, an avid reader, a Sudoku expert, and spent many hours on his laptop surfing the Web, playing games, and following family and friends on Facebook.

Darrell is survived by his loving wife and children, five grandchildren (Paul, Abbey, Benjamin, Mathew, and Lindsey), five great-grandchildren (Tyler, Aubrey, Pete, Theo, and Scarlett), and sister-in-law (Patricia Atwood). He was also loved by his nieces and nephews, godchildren, and many special friends.

Darrell was predeceased by his parents and all three of his siblings (Gayle Meyers, Madeline Barr, Harold Grovesteen).

Offer Condolence for the family of Grovesteen, Darrell Duane