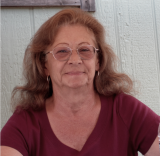 Sharon (Ross) (Timmer) Kovalik of Pine, Arizona, passed away unexpectedly in Phoenix, Arizona on November 5, 2014.
She was born on December 7, 1947 in Sioux Falls, South Dakota to Charles and Donna Ross. She was among the first graduating class from Lincoln High School in Sioux Falls, SD in 1966. Sharon was employed at the State Theater while in high school. She married Roger Timmer in April 1969 and was employed at GTA Feeds. Sharon was also part owner of Rental Connection in Sioux Falls until she and her family moved to Arizona in 1988.
Sharon retired from Salt River Project after about 16 years and moved to beautiful Pine, Arizona. Sharon worked part time for Prudential Arizona Properties and U-Haul. In 2006, she married Russell (Rusty) Kovalik.
Throughout her life Sharon enjoyed socializing with friends and family. She always had a heart for animals. Later in life, Rusty introduced Sharon to the enjoyment of bass fishing and hunting in the serene mountains of Pine, Arizona.
Grateful for having shared her life:
Mother, Donna Ross of Sioux Falls, South Dakota.
Beloved husband, Russell (Rusty) Kovalik of Pine, Arizona.
Daughter, Tara (Timmer) Taylor, her husband Chris and their two children Ashley and Caitlynn of Mesa, Arizona.
Son, Brian Timmer and his wife Tracy with their daughter Aiden of Payson, Arizona.
Son, Jim Wentzlaff, his wife Kim and their children Kian and Kellan of Lakeville, Minnesota.
Sisters, Cindy (Ross) Bunkers, and Tami (Ross) Anderson and her brother-in-law Roger from Sioux Falls, South Dakota.
Previous spouse, Roger Timmer of Strawberry, Arizona and multiple nieces and nephews.
She was preceded in death by her father Charles Ross and brother-in-law Phil Bunkers.
The family will hold a private service for Sharon near the mountains she loved so much. Memories and condolences may be shared online at www.awisechoiceaz.com or mailed to: Tara Taylor, 6645 E. Preston Street, Mesa, AZ 85215.

Offer Condolence for the family of Sharon Kovalik