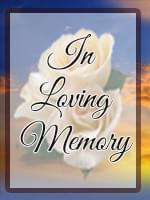 In 1946, she married the love of her life, Clayton L. Weddle, who preceded her in death in 1987.  She was also preceded in death by her 4 brothers, Harry Logan, Ed Logan, Martin Logan and Charles Logan.

“Vi” was an avid golfer, playing in multiple leagues and tournaments in St. Joseph, MO, Pekin, IL and Arizona.  She volunteered at many functions at both church and school, was a Girl Scout leader for 10 years, PTA president and homeroom mother.  Family was most important.  Loved, admired and known by many, she is now back in the waiting arms of her beloved Clayton, her forever dance and golf partner.

Offer Condolence for the family of Weddle, Viola